as seen in PMT Magazine,September 2006

with CSD consumption on the decline, the growth of non-CSDs is forcing beverage packagers to embrace unique technologies to maintain container consistency.

Anyone over 25 years old can remember the peak of the “Cola Wars.” The phrase was coined in the 1980s and 90s to describe the mutually-targeted marketing and advertising campaigns between Coca-Cola of Atlanta, Ga., and Pepsi-Cola of Purchase, N.Y. 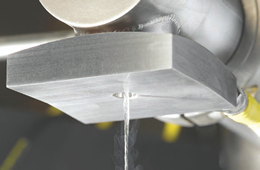 A close up of a liquid nitrogen doser

The two largest beverage companies in North America each wanted to convince consumers that their particular carbonated potion was consumer preferred. While taste is ultimately a personal choice, there was no disputing the fact that cola was king. From year-to-year, soft drink consumption grew. As recently as 1998, carbonated soft drinks (CSDs) continued to show no less than three percent annual vol- ume growth.

In the year immediately before the turn of the century however and the four years since 2000, the growth of CSD consumption dropped. Regardless, CSDs still ended each year with plus volume growth according to beverage industry watchdog and newsletter Beverage Digest.

2005 marked the first time in at least two decades that Americans bought fewer CSDs than the year before. Sales volume fell .2 percent in the United States from 2004, as consumers, perhaps seeking a healthier beverage alternative, began consuming more waters, teas, dairy-based beverages and sports drinks like PowerAde and Gatorade.

While the percent decline is not significant, the trend has opened eyes amongst major CSD companies and brands. 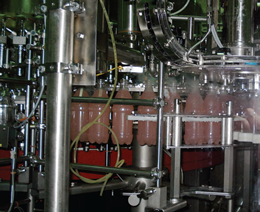 A VBC Nitrodoser discrete dosing bottles during ramp up

Within three weeks of installation in its Londonderry, N.H. plant, CCNNE’s new line met its goal of 900-plus bottles per minute with continuous LN 2 dosing at top speeds and discrete dosing during ramp up 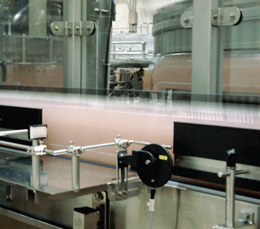 Beverage companies, like Coca-Cola and Pepsi, have seen the declining trend in regards to CSD con- sumption and have ramped up non- CSD efforts to meet the growing demand.

While the percent decline is not significant, the trend has opened eyes amongst major CSD companies and brands. Beverage companies, like Coca-Cola and Pepsi, have seen the declining trend in regards to CSD con- sumption and have ramped up non- CSD efforts to meet the growing demand.

From a packaging perspective the rise in non-CSDs has fillers searching for ways to maintain stability in PET (polyethylene terephthalate) bottles and thin walled aluminum cans, without the internal pressure from carbonation.

These lightweight containers can collapse when stacked in warehouse or when transported by the caseload.

One solution is to create thicker walled bottles, but the rising cost of resin makes this resolution counterproductive at best.

The formula that is becoming popular as a means of ensuring stability, while also extending shelf life, is liquid nitrogen-dosing systems.

Liquid nitrogen (LN2) is dosed into the headspace of a beverage container immediately before closure. The cold liquid nitrogen is dispensed at -320°F, which turns into nitrogen gas and rapidly expands at room temperature, creating pressure.

Since nitrogen is an inert gas it doesn’t dissolve in the beverage and is released once the container is reopened.

LN2 dosing was first applied to beverages by Vacuum Barrier Corporation (VBC) of Woburn, Mass. in 1986, when Coca-Cola of Canada approached them about developing a system to prevent the collapsing of its cans of hot-filled Five-Alive juice.

VBC had been engineering, designing and fabricating cryogenic equipment since 1958 and created the Linjector system to produce a steady horizontal stream of LN2 at Coca- Cola’s Toronto plant.

The cans were fed under the gravity driven stream, allowing each of the cans to receive a dose of LN2. As PET bottles of juices, teas and water started to grow in popularity in the 1990s, VBC developed its Nitrodose system to vertically deliver controlled amounts of LN2 for pressurization or inerting. The gas also proved popular with consumers for a more cosmetic reason.

“People simply like the feel of a firm bottle when they grab a water or juice out of a store’s cooler,” explains VBC vice president Edward Hanlon. The firmer bottle also dispenses much more consistently in vending situations, he adds. Bottles that do not maintain rigidity often jam.

As beverage makers of different sizes began incorporating LN2 into their filling process, VBC expanded the line of Nitrodose systems. There are now models to handle slower start up lines in the 100 bottles per minute (bpm) range, up to the highest speed PET and aseptic lines running more than 1,000 bpm.

As beverage makers of different sizes began incorporating LN2 into their filling process, VBC expanded the line of Nitrodose systems. There are now models to handle slower start up lines in the 100 bottles per minute (bpm) range, up to the highest speed PET and aseptic lines running more than 1,000 bpm.

“As the demand for [non-CSDs] has grown, the equipment has become better to match the other parts on the line,” says Hanlon, noting speed as an example.

While the differences in speed are obviously vital to a filling line, the Nitrodose system’s ability to toggle between individual or discrete doses and a continuous stream of LN2 might be more important to larger filler’s bottom line.

A continuous stream of LN2 at lower bpm speeds fills each of the bottlenecks sufficiently, but also wastes LN2 in the large gaps between bottles. Eventually the spilled nitrogen literally creates a messy cloud over the dosing station, not to mention the cost of wasted LN2. While the cloud offers no health or sanitation risks, it can create that perception.

“In some cases lower speed lines would waste more nitrogen than they were using,” Hanlon says. 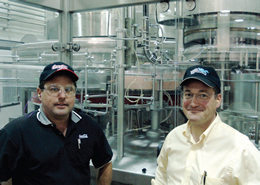 The Nitrodoser Easy Doser, which runs up to 300 bpm, discrete doses each container. The pneumatic valves on VBC’s mid-range MS model can run 750 bpm, while the high speed HSV model can match all PET bottle and metal can line speeds.

Both of these models have the option to switch between discrete and continuous stream dosing depending on line speed. The Nitrodoser HSA is also offered for beverage solutions that call for aseptic filling.

No Time For Change

With established CSD lines already running 24/7/365, LN2 dosing systems can be attached to established lines without incurring much downtime.

After running the VBC doser for several months and observing the HSV’s performance, maintenance manager Dave Labrecque pushed for the new dosing system to be installed on CCNNE’s line four.

Pressure variation and reliability issues with their existing dosing system were cited as the primary reasons for changing to the HSV system.

“Our old line four doser caused too little pressure in some bottles and too much in others,” explains Labrecque. “Given the HSV’s track record on line three, the decision was easy.”

In June 2004, CCNNE upgraded line four of its four-line plant with a Nitrodoser system, but the upgrade was temporary.

Line four, which is a dedicated line for the popular 20oz size PET bottles, was replaced with a new Krones VODM 130 valve filler in March 2006. (The new doser that was temporarily installed on line four was moved to line two.)

Since an entirely new line was being installed, Labrecque worked with VBC sales manger Mike Johnson from specs to start-up. The new line was needed for Coca-Cola’s expanding line of Dasani flavored waters, which have been well received by consumers.

“[VBC] was more than willing to do whatever it took to get the job done,” Labrecque says.” Within three weeks of shutting down the old line, the new line was in and bottles were being shipped out the door. Line four’s new HSV doser easily met its goal of 900 bpm with discrete LN2 dosing at top speed.”

“Our Nitrodose Systems are designed to be simple to install and operate, while incorporating the latest technology,” he says.

The 18-year-old CCNNE plant also runs a canning line, which was equipped with a Nitrodose system in September 2005. While line one runs at all line speeds, it typically runs at 1,750 cpm (cans per minute), while discretely dosing up to 1,200 cpm.